Though native to China and Japan where it grows wild among plants in mountainous and hillside forest understories, Aucuba japonica is a familiar sight in parks, gardens, and cities around the world where it has built a reputation for bringing green to metropolitan areas for over 300 years. In fact, this plant is so green that, in Japanese, it’s blue: the name アオキ (Aoki) meaning “evergreen shrub” also has a literal meaning of “blue tree.” This, however, is not due to an optical illusion or special plant properties, but rather the result of a nuance in the history of the Japanese language. Ancient Japanese included four words for colors: red, blue, black, and white, which some suggest indicated degrees of brightness, darkness, and tone. In this system, shades of green (緑, midori), were incorporated under the word 青 (ao, blue). Though Japanese today features a vast variety of color terms, using 青 (ao, blue) for things typically seen as 緑 (midori, green) is not totally uncommon, especially in relation to fresh vegetation. As such, it is said that Aucuba japonica, whose leaves and new branches appear noticeably deep green year-round, garnered the name アオキ (Aoki).

More than a linguistic nuance, the enduring deep green of Aucuba japonica played a prominent role in its eventual worldwide spread as an ornamental plant. During the Edo period (1603-1868) the population of Tokyo (then called Edo) rapidly expanded, completing the city’s transformation from a small village into one of the world’s largest population centers, with over one million people residing in the city by the mid-1700s. As the city expanded, access to nature and green space became more limited, heightening the demand for urban-tolerant trees and shrubs that remained green all year. The evergreen Aucuba japonica met this need, and was broadly planted in private gardens and parks throughout the city.

As it happened, Aucuba japonica also found itself in the middle of another fad during this time: the cultivation of plants with variegated leaves, or leaves that feature differently-colored patterns or edges. Also known to some as the “Gold Dust Plant,” some cultivars of Aucuba japonica feature golden spots on their leaves, making it an even more attractive option for a garden shrub. This, in addition with its ability to grow well in the shade and its tolerance of air pollution and poor soil conditions, made it a staple ornamental plant species in urban centers around the world, where it continues to be cultivated. 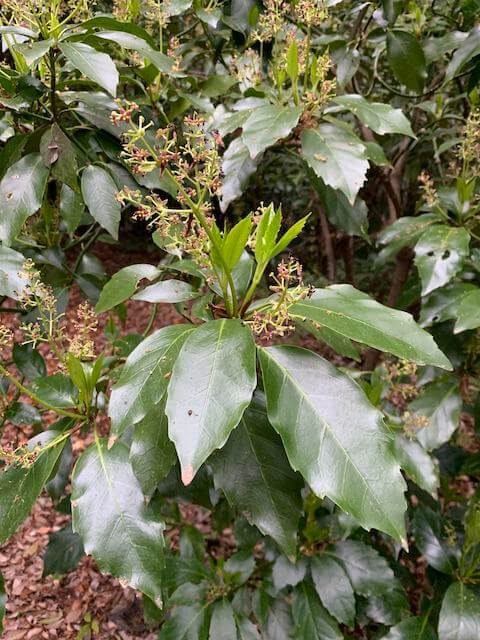 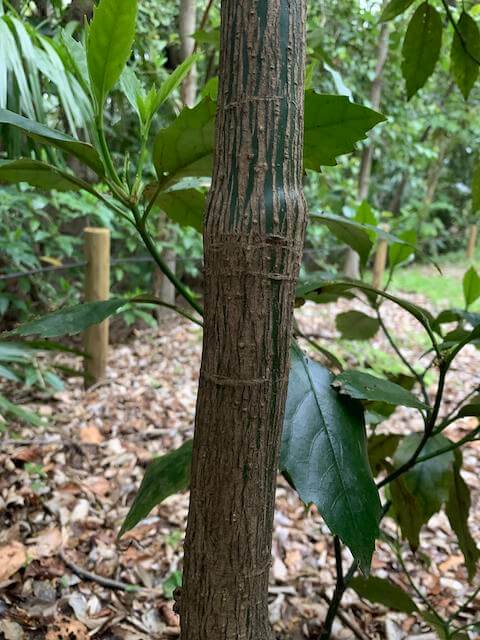 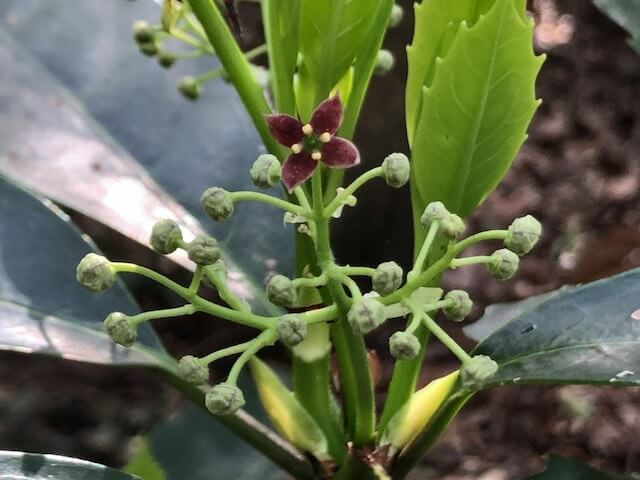 Leaves: Leaves are 8 - 25 cm long and 2 - 12 cm wide and have dentate margins. Leaves are glossy and leathery in appearance, and grow opposite each other along the branch. Though often a vibrant green, certain cultivars of Aucuba japonica are well known for having variegated leaves. Many popular cultivars, such as Aucuba japonica 'Variegata,' feature yellow or golden spots on the leaf.

Flowers and Fruits: Small, non-flashy purple flowers with four petals and four sepals appear from March - April. Aucuba japonica is dioecious, which means that male and female flowers occur on different plants (as opposed to monoecious plants, where both male and female flowers occur on the same plant). On male Aucuba japonica plants, flowers appear in upright, branching structures (panicles), while female flowers appear in short clusters. Fruit appears from November - April and are about 1.5 cm long, bright red, and berry-like. The fruit is not overly popular among animals, and most of them will remain on the shrub throughout the winter. However, the Brown-eared Bulbul (Hypsipetes amaurotis, ヒヨドリ or Hiyodori) will occasionally eat them in the middle of winter.